How to Online Guide to Create RSS Feeds in Twitter

The step-by-step guide explains how you can easily create Twitter RSS feeds for the new Twitter API with the help of Twitter widgets and a Google Script.

Twitter does not offer RSS Feeds but there is a simple solution that you can use to generate RSS feeds for your various Twitter streams including Twitter search results, user timelines, favorites, lists and even the new Twitter collections.

RSS feeds are essential if you need to use your Twitter data elsewhere. For instance, you cannot create recipes in IFTTT that get triggered when there’s a new @mentions or a new tweet is added to search results. You cannot import your Twitter timeline automatically into your blog. You cannot follow Twitter feeds in an RSS reader like Feedly or even Google Docs.

There are two way to create RSS feeds for Twitter. You can either write a Twitter App or take a more simple alternative described here. 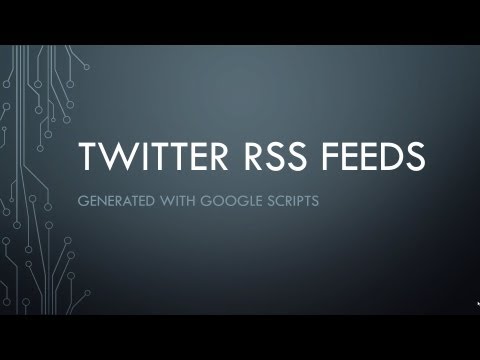 The trick is simple. Twitter offers JavaScript based widgets to help you embed user timelines and Twitter search results into your website.  What we’ll do is transform these HTML Twitter widgets into regular XML Feeds with the help of a Google Script. Here’s a step-by-step guide:

Google Script will now create a unique URL for your RSS web app that will look something like https://script.google.com/macros/s/ABCD/exec.

Just append the Twitter Widget ID (created in Step 2) to this URL and your RSS feed for Twitter is ready. For instance, if the Twitter widget ID is 123456, your RSS Feed URL would be:

The Twitter RSS feed will have all details about the tweet including the date when that tweet was posted, the full name, user name and profile picture of the Twitter user and the actual text of the tweet. You can see some real examples of Twitter RSS feeds here and here.

Should you wish to create another RSS Feed for Twitter, just add another widget inside Twitter and use that new widget’s ID with the same Google Script URL.